This article was kindly published in the Waterloo Journal Vol.39 No.3 Autumn 2017.

Cutting through the heart of the Waterloo battlefield is the Charleroi-Brussels road. Numerous old postcards record the many monuments that line this road, from the Belgian, Hanoverian and Gordon on Wellington’s ridge, to the Hugo and Wounded Eagle on the French ridge. Images of these are numerous, and the monuments are little changed, so this fourth article in our postcard series focuses on significant buildings.

We start at Wellington’s overnight headquarters in Waterloo. Built in 1705, by 1815 this was the widow Bodenghien’s inn and stables. In the late 1800s this opened to the public, becoming a proper museum in 1955 and the Wellington Museum that we know today in 1975. Signage on the face of the property prior to the museum museum states “In this house is to be seen the bed in which the Duke of Wellington slept the glorious eighteenth of June 1815 … the room not only contains the bed, but also many things most interesting to English people” The adoring travellers could then calm themselves in the Café Restaurant, enjoying the advertised Allsopp’s Pale Ale or Imperial Stout (in fine condition!) stiffen-up with a choice of Irish, Scotch or Canadian whisky, London gin, Schweppes or a gentler Horniman’s tea: 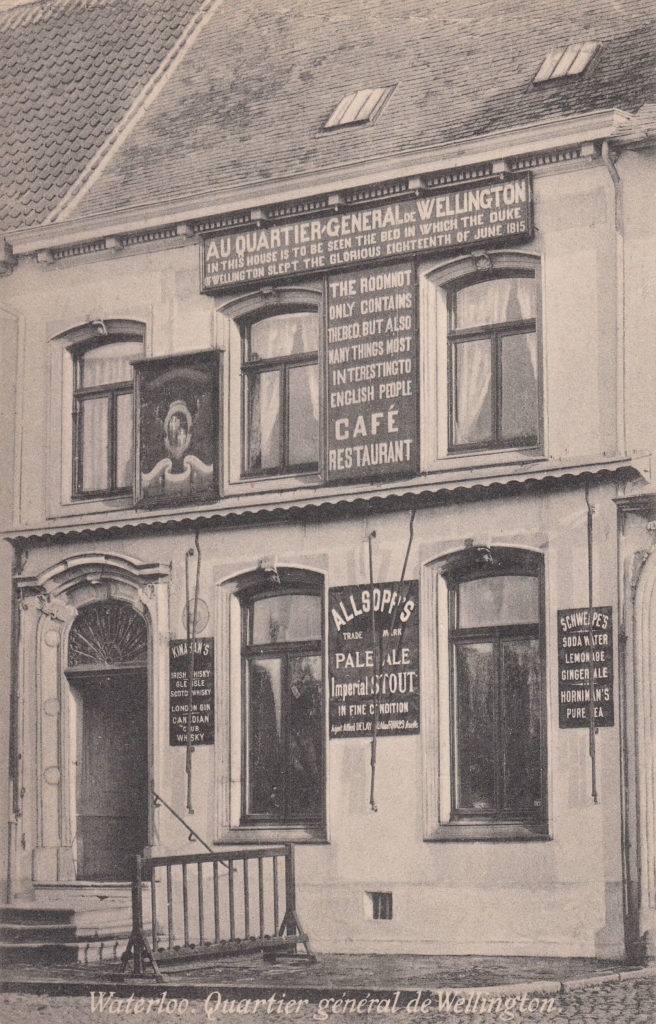 A haven of calm offering tribute to the fallen is the Royal Chapel opposite the museum. This wonderful echo-chamber of a building was inaugurated in 1690 in the hope that the Hapsburg Charles II of Spain and the Southern Netherlands would sire a son. He failed, leading to the War of the Spanish Succession in which the Duke of Marlborough proved himself such a masterful leader, campaigning over much the same territory a century before Wellington. The main church was added behind in 1826: 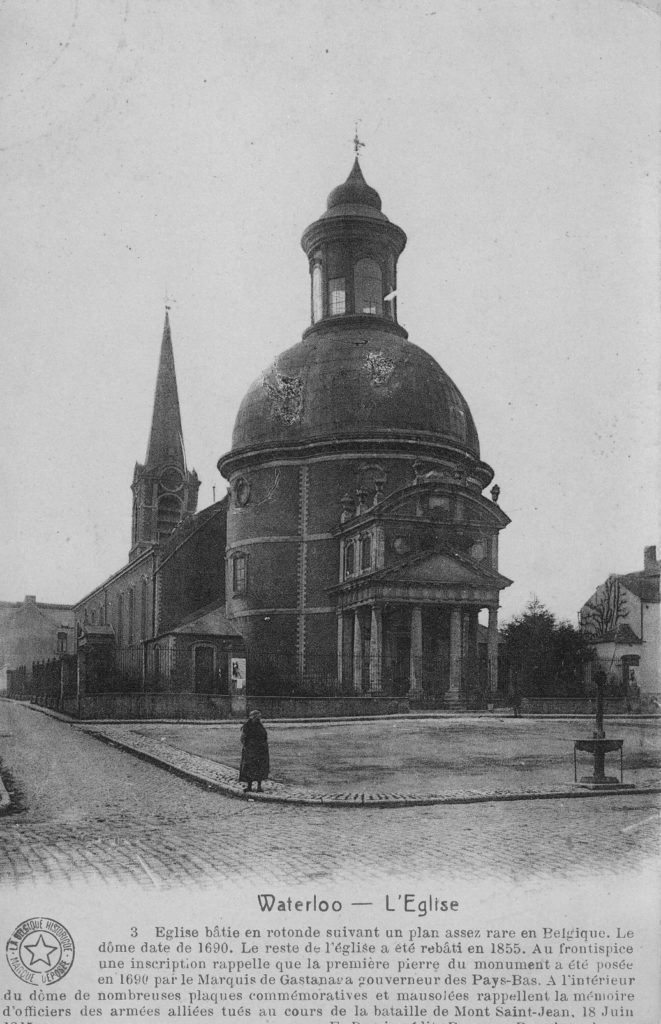 Moving towards the battlefield we reach the strategically vital fork in the road, splitting towards Nivelles and Charleroi. Following the Charleroi road towards the allied ridge we pass the great Mont St Jean farm complex, which took its current shape in the 1770s, and where the Life Guards dug potatoes on the morning of the battle. The most recent evolution includes an excellent medical museum and micro-brewery. This image looks North to Mont St Jean village, showing the tramway that led South to the battlefield, and taken long before the Royal Army Medical Corps tablet was erected in 1981: 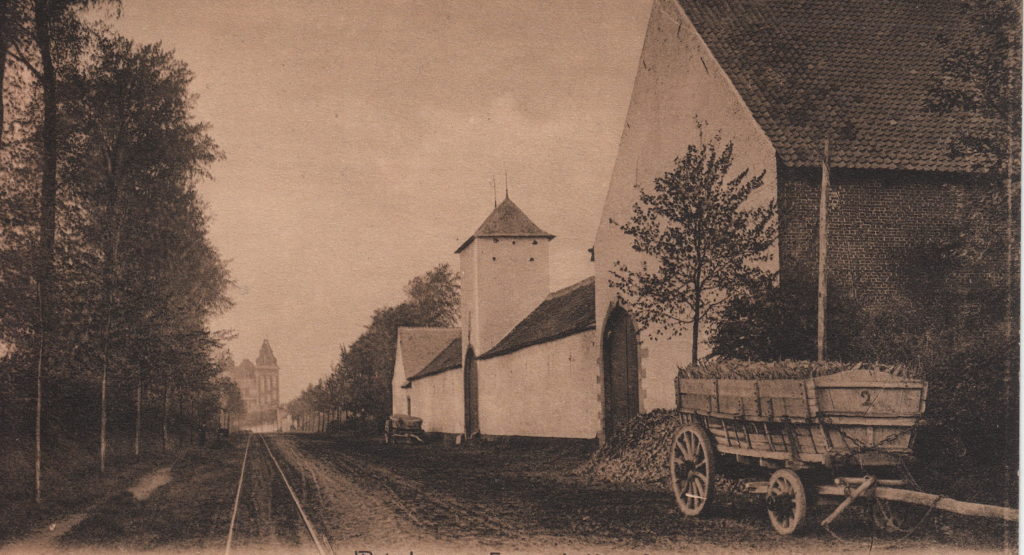 The intriguing and commanding property in the distance is Cheval Castle, built in 1895 on the road fork by a Frenchman who made his fortune in chemical fertilizers. Comprising 4 towers and 99 windows, he slept in his castle just once, but his daughter and her husband occupied it through to 1962. It was demolished to permit road widening in 1966, and you can now walk over the site by visiting McDonalds.

We now move on, over the allied ridge to La Haye Sainte. Famed in battle, and little changed today, it also played host to military topographer William Siborne from May to November 1830, the man to whom we owe such thanks for collecting so many first-hand accounts of the battle. This image also shows on the right the tramway, which beyond the spur to the lion mound was extended further for the crowds attending the unveiling of the wounded eagle monument on 28th June 1904. In 1898, a tram also connected Braine L’Alleud railway station to the battlefield: 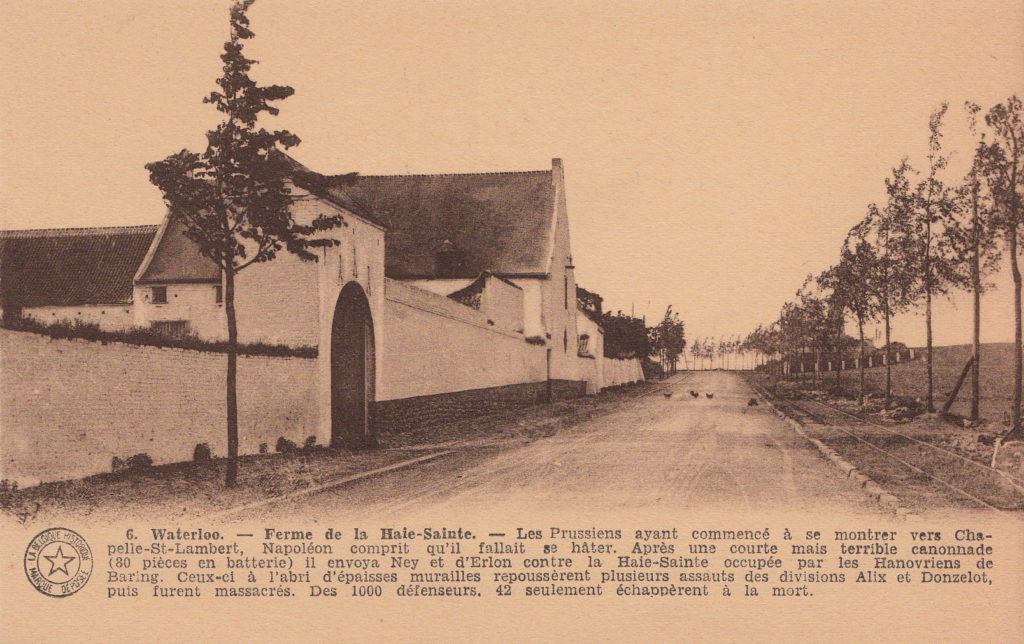 Further down the road towards the French ridge we come across this haunting view. The two nearest houses are post-Waterloo, but beyond them is La Haye Sainte and up on the ridge the Lion mound, panorama and the buildings covered in the previous article: 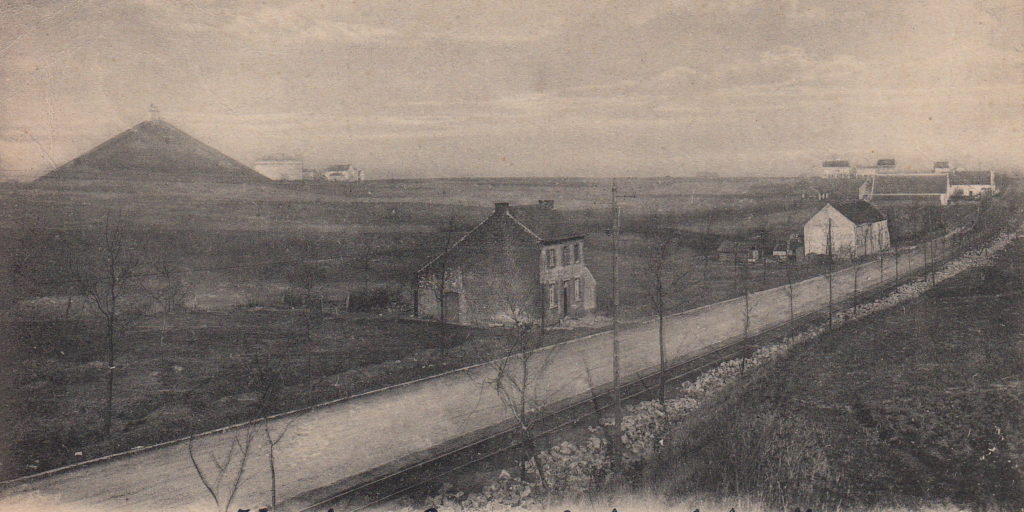 Moving on towards the French ridge we reach Belle Alliance, to which we devoted the first article in this series. Beyond this was the modest home of Jean-Baptiste De Coster who made his fortune telling tales of his seizure to act as reluctant guide to Napoleon during the battle. The house still exists, but with a brick façade: 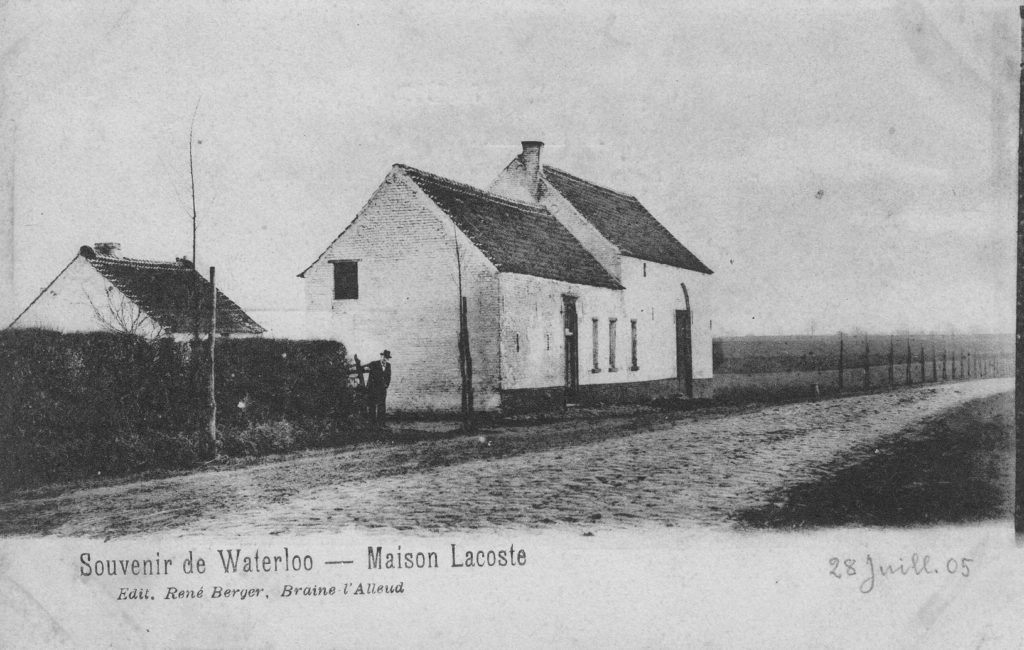 Heading on South beyond the heights of Rosomme we finally reach Le Caillou, now home to Napoleon’s Last HQ Museum. Now set back from a wide road, this image illustrates how much the road network has changed. Plundered and torched, the ruins were put up for sale within five weeks of the battle, whilst a substantial claim for losses was prepared, so little of this is original: 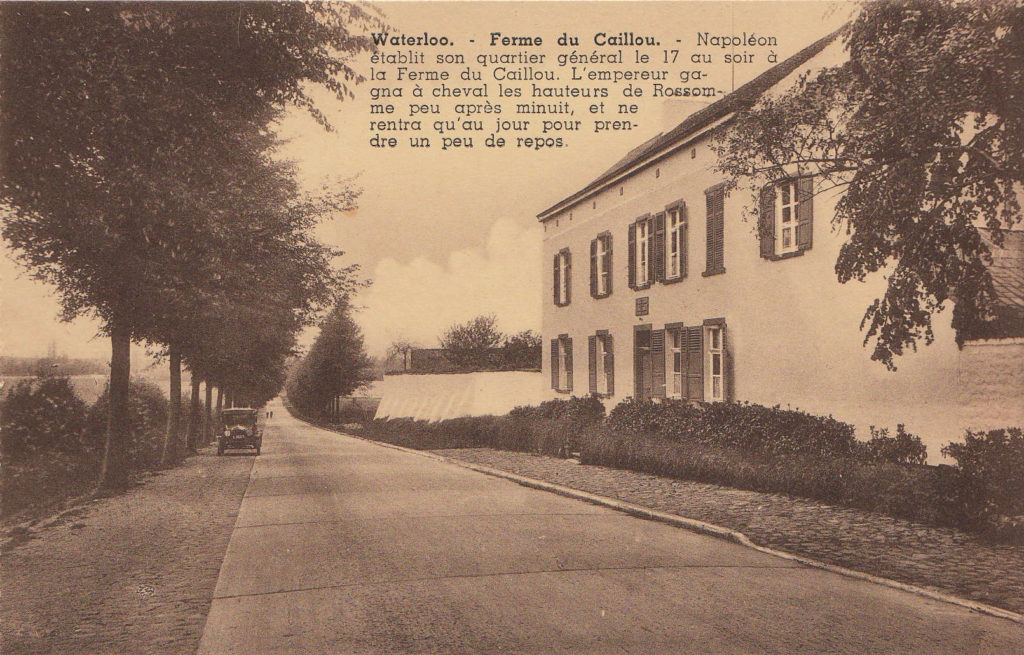 Le Caillou became famous for displaying the original table, chairs and cloth used by Napoleon, although how these could have survived the looting and destruction, before being remarkably discovered over 50 years later is beyond me. Like Wellington’s bed, the allure of relics must have been compelling.

For the next in the series we will head South along the road to Genappe and beyond.