This article was kindly published in the Waterloo Journal Vol.39 No.1 Spring 2017.

Standing proud, disdainfully facing the French border, overlooking the ‘mournful plain’ described by Victor Hugo, the imposition of Le Monument may well have “ruined” Wellington’s battlefield by removing much of the escarpment. Yet this mighty mound, and the community of properties that grew up around it on the allied ridge has been at the forefront of visitor attraction, doing much to sustain the interest of the masses to this most important of battlefields over so many years.

In the immediate aftermath of Waterloo, the opportunity to cement the identity of William I’s Kingdom of the Netherlands was too good to miss; memorialising a monumental battle on the soil of such a young Kingdom, on the spot where its eldest prince had played his gallant part, shedding blood whilst leading the united Dutch and Belgian troops who played such a conspicuous role in the defeat of Napoleon.

In the aftermath of battle competitions of painting, poetry, and architecture were established. Queen Wilhelmina, formerly a Prussian princess, took a keen interest in selecting the architectural winner, sorting the plans from sarcophagus, ossuary, stone and brick monuments, arch and fountain to the winning mound design.

The mound and lion was described by their architect Van der Straeten, the lion symbolising victory, the paw rested on the globe signifying the repose of Europe. Construction commenced in 1824 and was completed in October 1826, the mound over 40 metres high surrounded by 140 blue stones. The 28 ton cast iron lion, sculpted by J-L Van Geel from Malines, forged in Liège, is formed of nine pieces, each pulled by 20 horses in the final part of their journey to the mound. The pedestal and plinth pushes the monument over 50 metres tall. There was no formal unveiling ceremony.

Our first image looks towards the Nivelles road and Braine L’Alleud before the construction of the motorway, showing the lion mound with some interesting undulations and views in the surrounding landscape. Many of these features are either no longer present or obscured by development and trees. At the foot of the mound is the Hotel de la Paix, built in 1904 as a private dwelling, becoming a hotel in 1932: 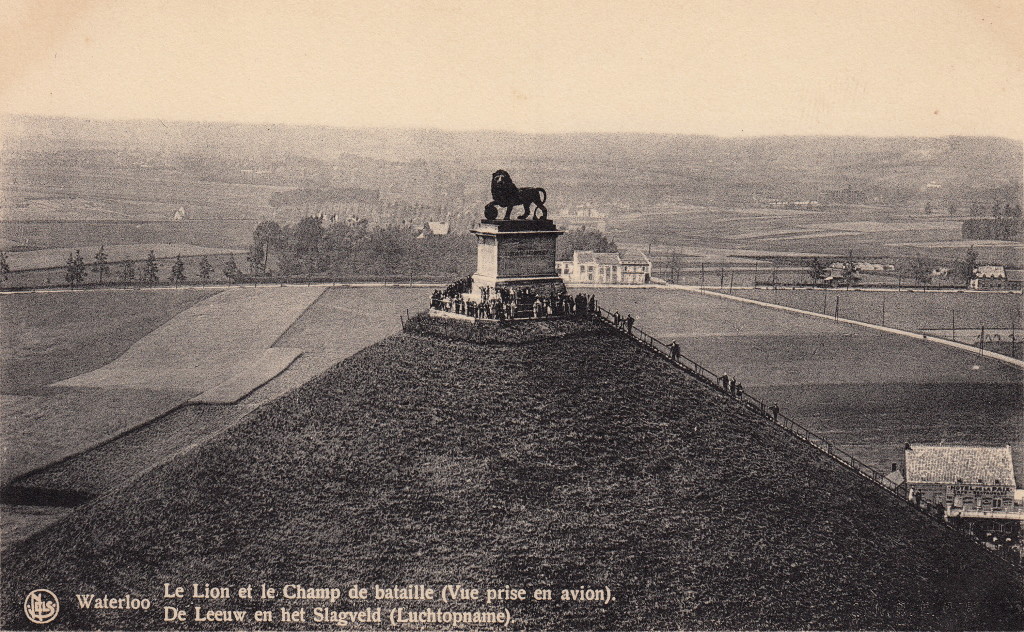 This view to the crossroads, across to Papelotte and beyond shows a wonderfully open view due to the almost total absence of trees. Taken before the construction of Le Monastère de Notre-Dame de Fichermont in 1913, before the private driveway running down to La Haye Sainte, with no vegetation in the sandpit area and a much deeper curve than exists today along the Rue de la Croix: 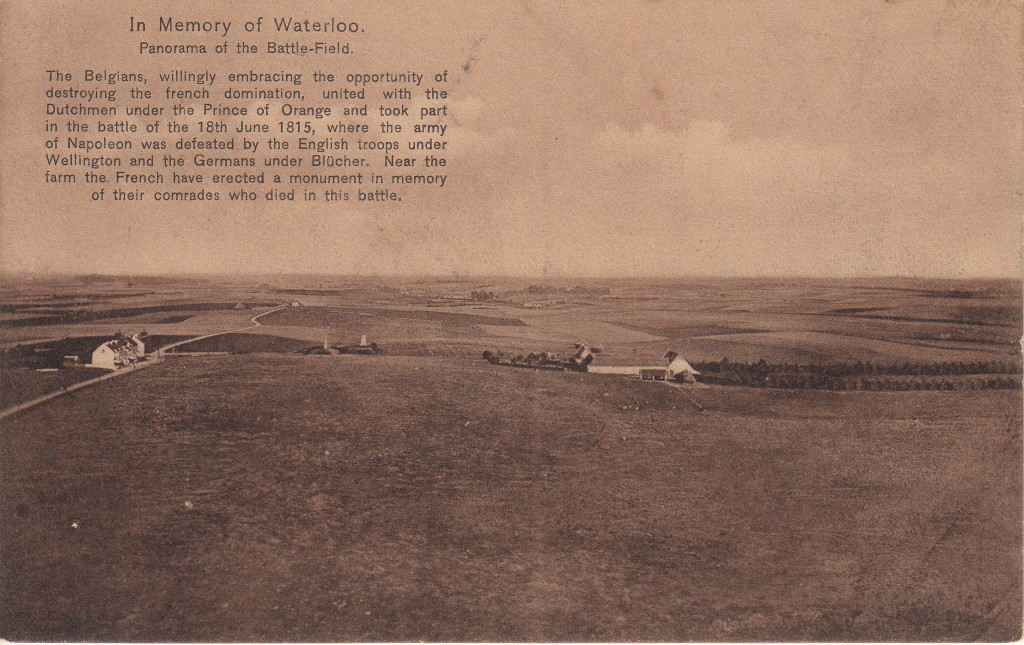 The only house to be built before the mound, in 1823, became a cabaret (inn), evolving into the Hotel des Touristes. This hotel shared the same fate as Hotel de la Paix, demolished in 2013/4 to make way for the underground Memorial museum. Next, in 1828, a Waterloo veteran was given the job of guardian of the mound, for whom a small house was built, then rebuilt in 1929, before finally being demolished to make way for the Visitor’s Centre. The post of guardian continued through to 1989.

By 1834 three thatched houses had been built near the crossroads. As this row of properties evolved, one constructed in 1882 as a café-restaurant (since extended, and still the closest restaurant to the crossroads) was known as “La Vue de l’Arbre de Wellington” looking over to the former location of the famous Elm. The image below shows what is now the frontage of Le 1815 Hotel, formerly the Grande Musée du Chemin Croix and Restaurant des Monuments: 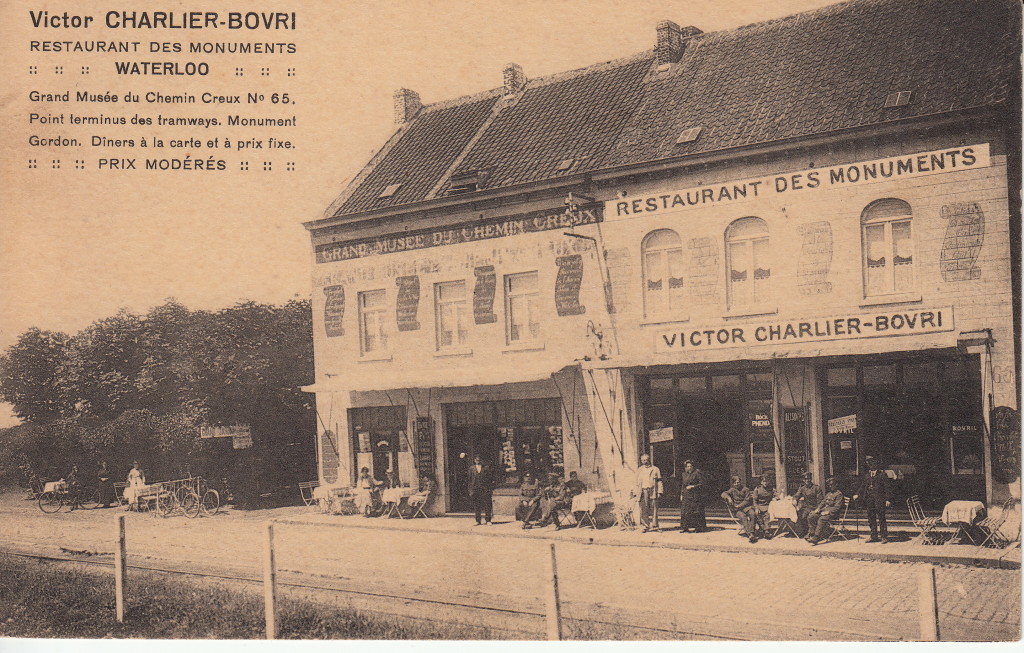 Much of the British appreciation of the hamlet revolves around Edward Cotton, a Waterloo veteran in the 7th Hussars and author of “A Voice from Waterloo”. Mr & Mrs Cotton moved to Mont St Jean in 1828, and subsequently to a house adjacent to the guardian. Cotton became the doyen of battlefield guides, until his death in 1849 when his body was interred beside Guards officer Blackman in the gardens of Hougoumont. His collection of battlefield memorabilia was subsequently displayed by his niece in the Hôtel du Musée in the lion hamlet, often referred to as the ‘Cotton Museum’ although the building wasn’t constructed until after his death.

This image taken from the top of the mound shows the largest building, the Hôtel du Musée. Just to the left in front of Hôtel de Musée the tall building is Hôtel des Touristes. Further to the left are the 1902 Waterloo Hotel (and subsequently Cotton discotheque!), and to its left the 1893 hotel, restaurant and tearoom Laiterie du Lion / Le Hussard, both demolished in 2015: 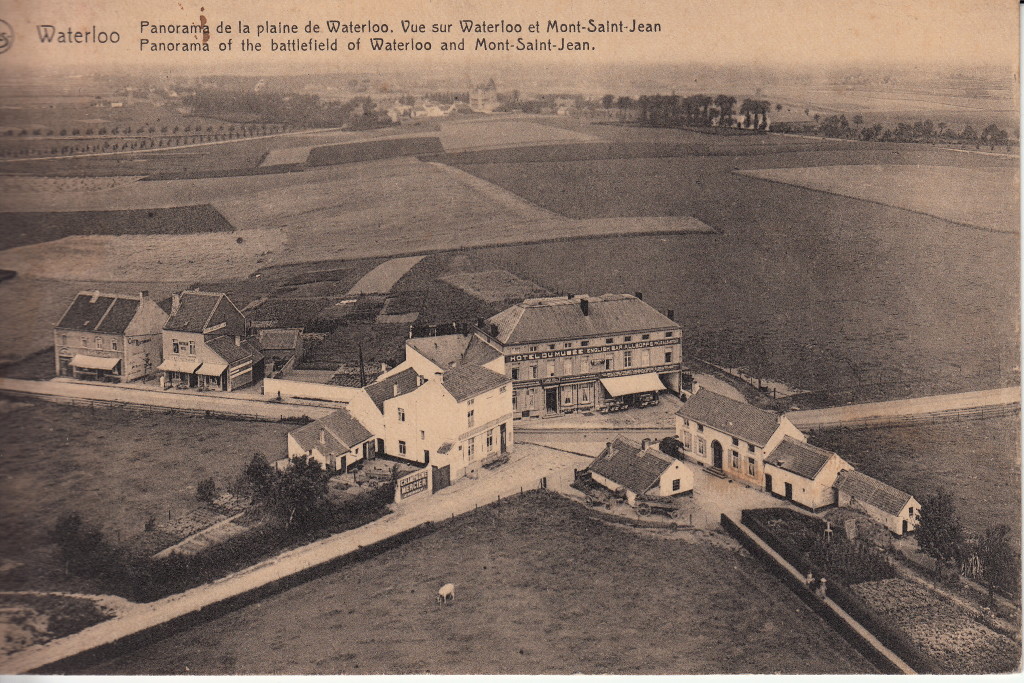 The above image also shows, behind the line of large trees, Mont St Jean farmhouse, and to the left of the trees the tall Castle of Mont-St-Jean. This imposing property was built in 1895, demolished in 1966, and now ignominiously is the site of the McDonalds “drive-thru”. Similar ‘march of history’ is evident just across the roundabout on the location of the modern Jaguar Land Rover dealership, which stands on the site of the former Hôtel des Collones, where Victor Hugo stayed whilst polishing his grand tome Les Miserables (and much Waterloo fiction!): 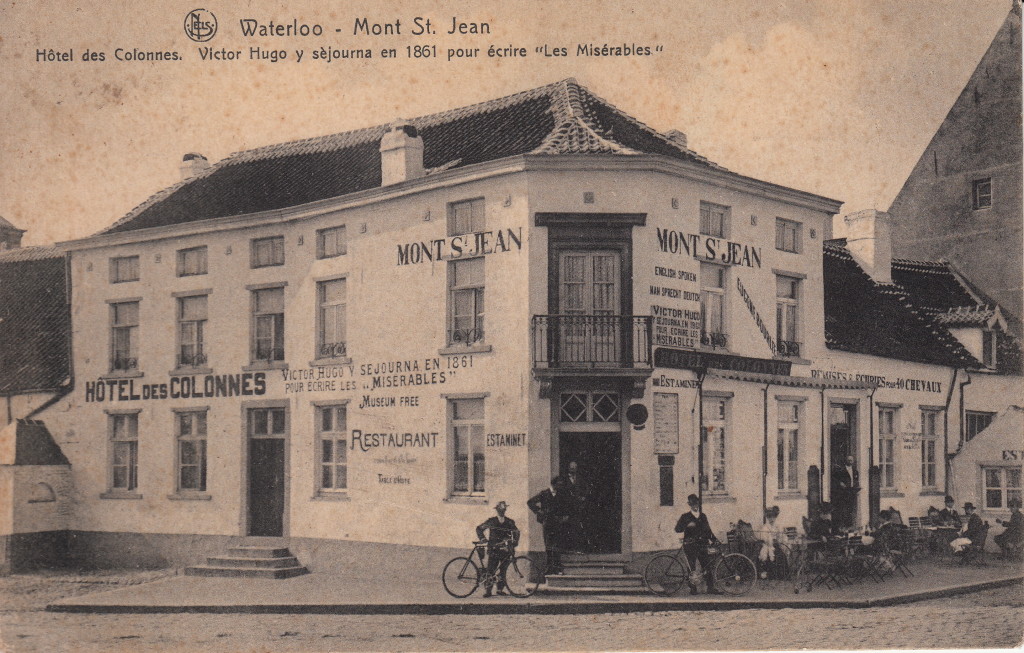 The distinctive rotunda building was created in 1911 to house the famed Dumoulin panorama as the great French cavalry charges swept the ridge. Still one of the largest paintings in the world, and restored to its full beauty for the bicentennial, 110m. long x 12m. high it took ten months for the team of painters to complete. This again changed the lion hamlet considerably, and 1913 saw the building of the adjoining Le Grand Hôtel du Lion and Hôtel du Prince d’Orange, part of which survived until 1989 to make way for the Visitor Centre, alongside part of the Le Wellington Café which survived until the Visitor Centre was demolished as part of the bicentenary improvement scheme: 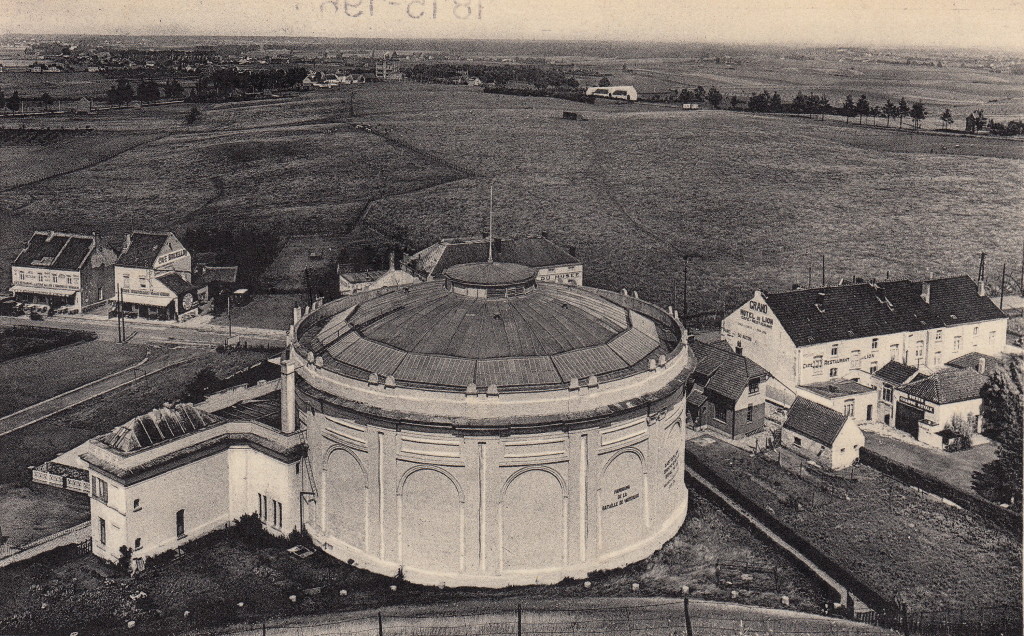 Over the years the lion mound has survived many threats to its existence. In 1831 French troops passed this way in support of the Belgian Revolution, damaging the Prussian Monument in Plancenoit and threatening the lion, behaviour that was promptly corrected by their Marshal Gerard who in 1815 had fought at both Ligny and Wavre. In 1832 the independent Belgian parliament saw the lion mound as a sign of Dutch oppression and odious to their friends the French, but all was protected by locals keen to preserve their roaring tourist trade. In 1918 proposals to blow up the lion as a means of celebrating French-Walloon solidarity, or less severely turn its face to the North, were by 1925 amended to plans for the demolition of the entire monument! In WW2 the mound featured anti-aircraft defences. Thankfully it survives.

Initially there was no intention that anyone should climb the mound, but log steps were added in 1835, the 226 steps in 1863, the platform at the top in 1864. This image shows the somewhat unkempt bushy look before today’s robotic lawnmowers enabled the current close-cropped shave: 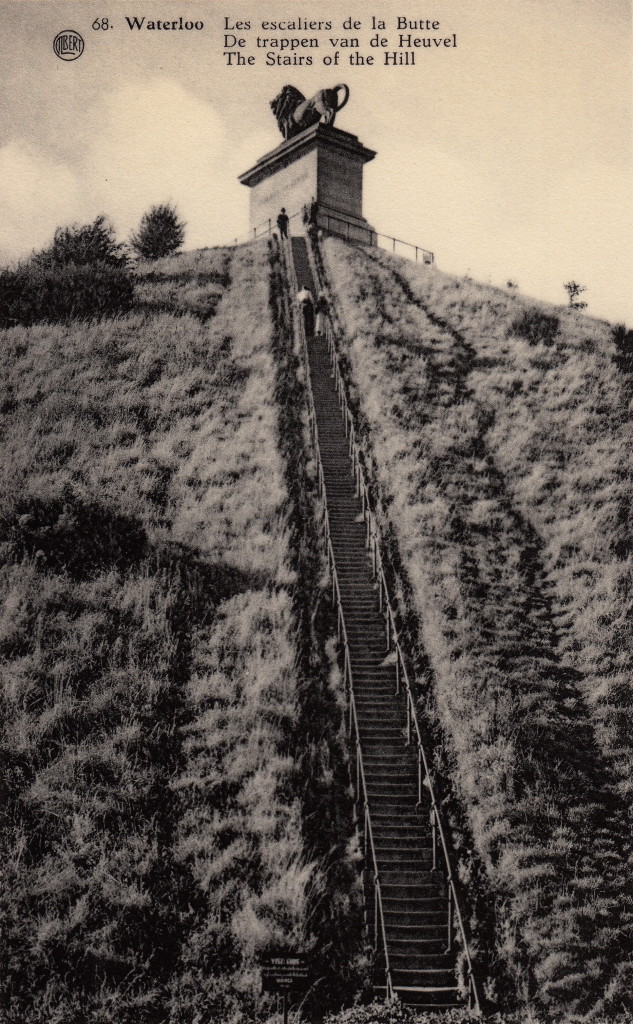 The prime location of the mound, at the centre of Wellington’s ridge, so hotly and valiantly contested on the day of battle, has witnessed much change over its 190 year life. The huge investment for the 2015 bicentenary has dramatically improved the visitor experience, but at the same time we have lost some history. These old images help us understand the experiences of those early battlefield tourist pioneers and provide a vital early connection to the landscape as it once was.

If you can help to date the cards, or if you have a different opinion, or additional information to offer, please do get in touch. This is the third in a series of articles by the author covering the evolution of different buildings on the battlefield, and your contributions and suggestions will be most welcome. Next up is the Mont St Jean-Le Caillou road including the Wellington Museum, Mont St Jean, La Haye Sainte and the old tramway.