This article was kindly published in the Waterloo Journal Vol.38 No.4 Winter 2016.

Often argued as the “key to victory” of Waterloo, the shattered remnants of fruit-trees, flowering shrubberies, woodland and alleys of holly and yew that bore witness to the events of 18th June 1815 are long gone. Yet three great lighting-scarred Sweet Chestnuts still stand near the South Gate, and of these just one clings to life, our enduring witness to the heroism and horrors of war and the trials and tribulations of Private Clay. Peppered with musket balls, massive, gnarled and ancient, this tree is our one surviving link with this place on that famous day.

The ground and property are also giving up their secrets, with the current superb works of archaeologists challenging and adding to the received wisdom of the past two centuries. The bicentennial restoration of the property now preserves this great fortress for future generations, but what of its history before the battle, and what can we learn about its evolution following the battle?

The local historian Jacques Logie found two mentions of “Gomont” in the 1300s, the second as a “tenure and home”. In 1474 the Order of St John of Jerusalem (the Knights of Malta) sold, for 100 crowns, ‘the Goumont’ comprising 24 bonniers of land (a bonnier being a measure of the amount of land that could be sown with around 8 bushels of seed). As the estate passed through various hands and grew in size the château was built, before passing in 1671 to a Spanish Lowlands courtier, whose grandson became Lord of Gomont. Left to a childless widow in 1791, the land then passed through marriage to an Austrian Knight, Philippe Louville, who had previously built a large house ‘Hotel d’Hougoumont’ in Nivelles in 1771.

The layout of the extensive woodland and formal gardens surrounding “Chateau d’Hougoumont” in 1771 is recorded in the beautiful cartography of Ferraris. By 1815 the land-use was much changed, mostly turned over to farmland, with a gardener living on site. In May 1816, the 86 year old Louville finding that he was unable to restore his damaged estate, sold it. Whilst the new owner pledged to preserve Hougoumont, the long-suffering gardener who’d survived the travails battle was required to leave his home. Hougoumont remained in private hands until 2003.

The extensive paintings following the battle show us varying and often misleading images, so it is good to jump the decades to the age of photography to get a ‘feel’ for what Hougoumont and its surroundings were like to the Victorian and Edwardian traveller. But to prove the point, our first postcard is just a drawing, giving a wild interpretation of how the Chateau looked prior to the battle. This image is very different to other images of the Château (such as those now on display at Hougoumont and the model beneath the Panorama), in design, style, layout and finishing, a warning that artistic licence knows no bounds! 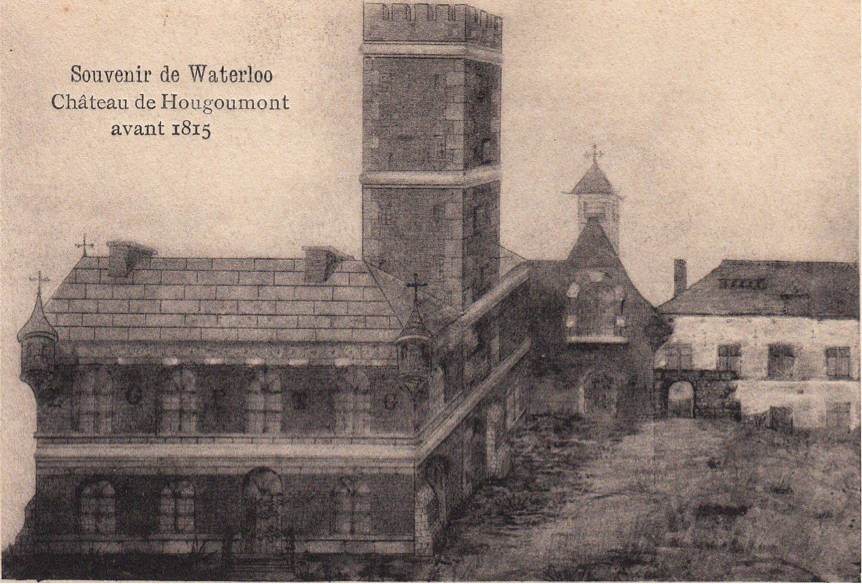 Postcards of Hougomont are numerous, so we can only show a small selection here. Our second card is typical of the familiar scene taken of the chapel, connected to remnants of the Chateau that was destroyed on the day. Rustic workers are often a feature of these images: 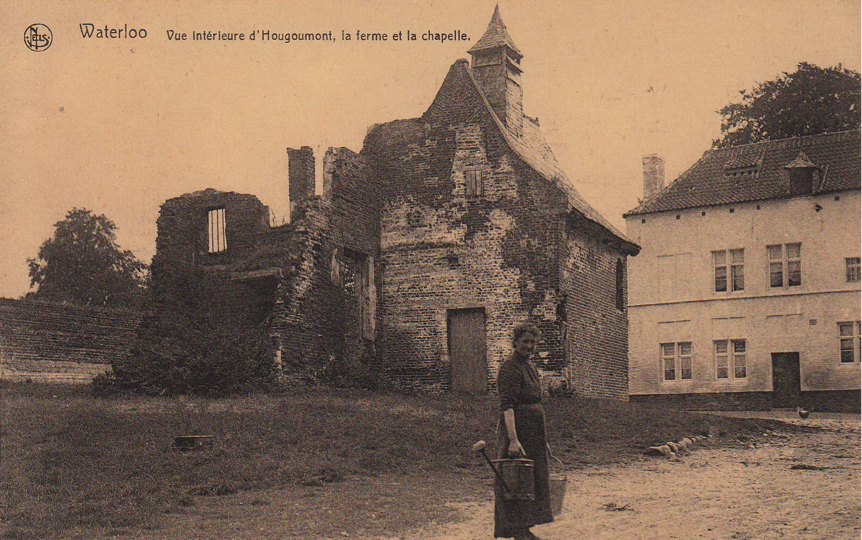 Moving back we take in a wider view of the working farm complex, looking on to the gardener’s house and the South gate, above which today is the cosy and tasteful apartment now let by the Landmark Trust: 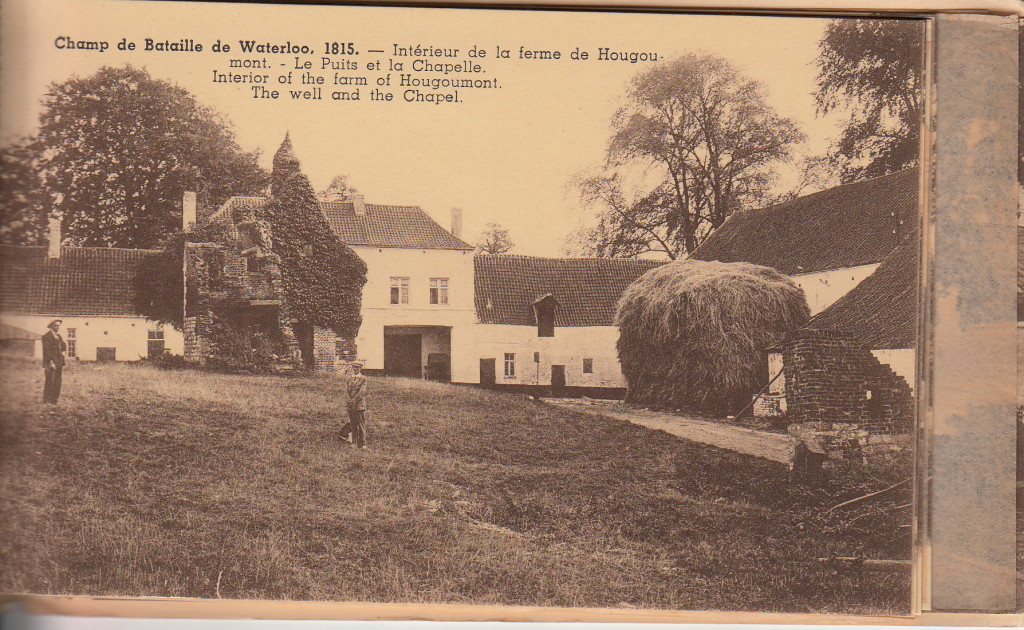 Turning around to look down towards the North Gate, various postcards over the years show many different forms of gate, heights of wall and changes in land-use beyond the gate up towards the allied ridge. In the foreground is the well, much collapsed since the end of the battle, which itself became a popular photography spot thanks to Victor Hugo and his myth of 300 French bodies: 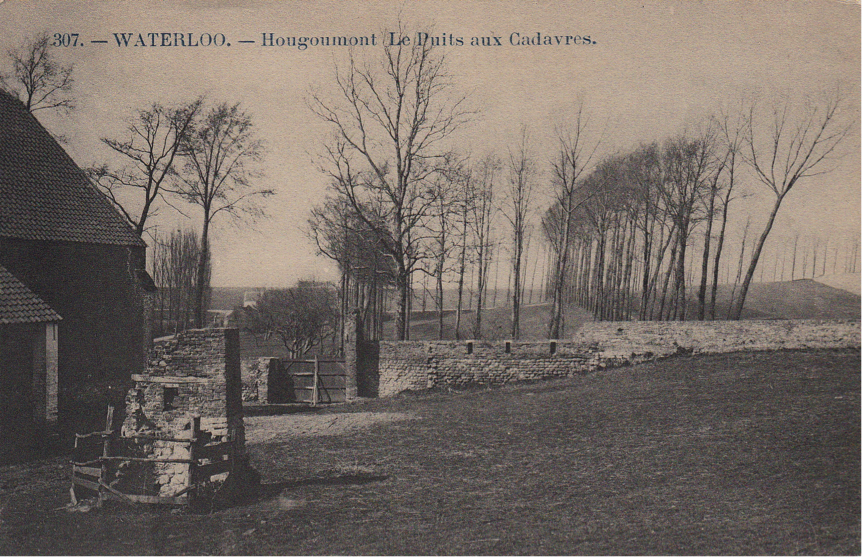 This famous view from outside the North Gate appeared on many cards, echoing the famous ‘closing of the gates’ event. Again showing many different sections and levels of brick and stone, confirming that the walls that we see today are not what the soldiers of 1815 saw. Just visible are pillars which used to extended the main barn out into the courtyard: 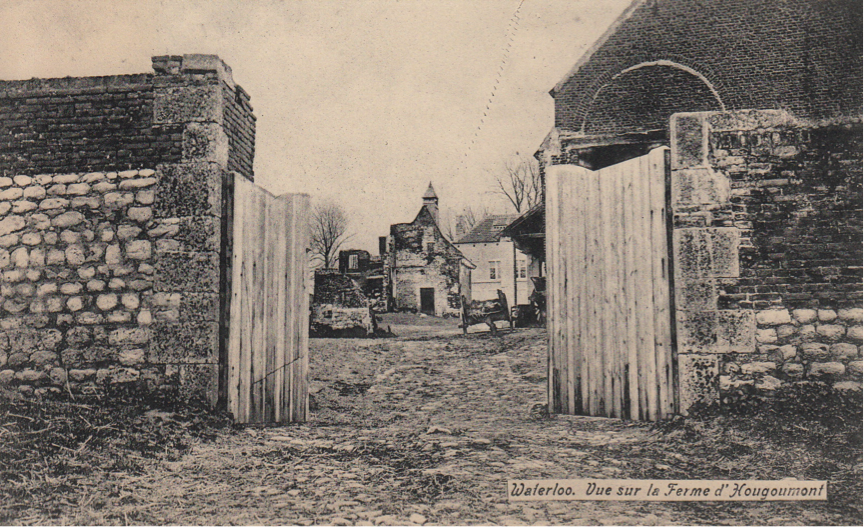 Walking around to the South Gate we have two images. The first shows the onset of organised tourism, with the Victoria to Waterloo coach with some very well dressed ladies and gentlemen: 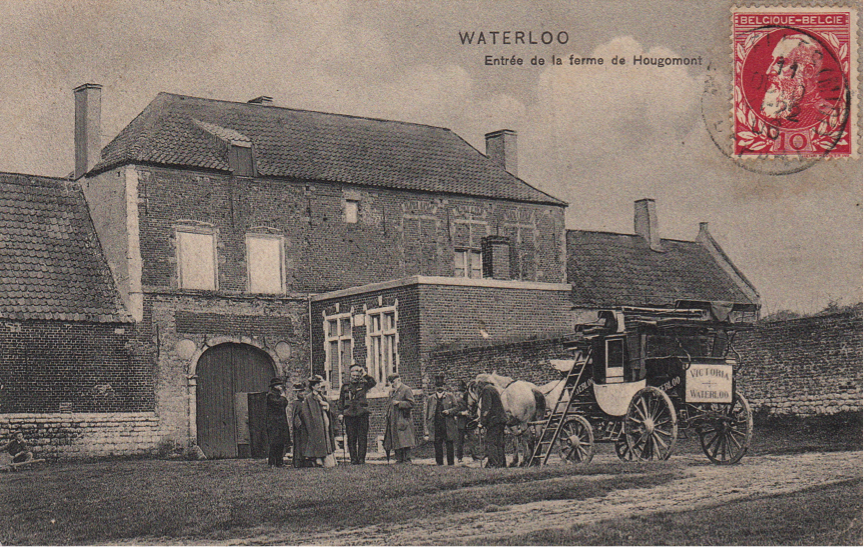 The second, older view without the ugly extension, is particularly unusual, showing two glazed windows above the South Gate with a view right through the Gardener’s house, into the courtyard and up to the ridge beyond: 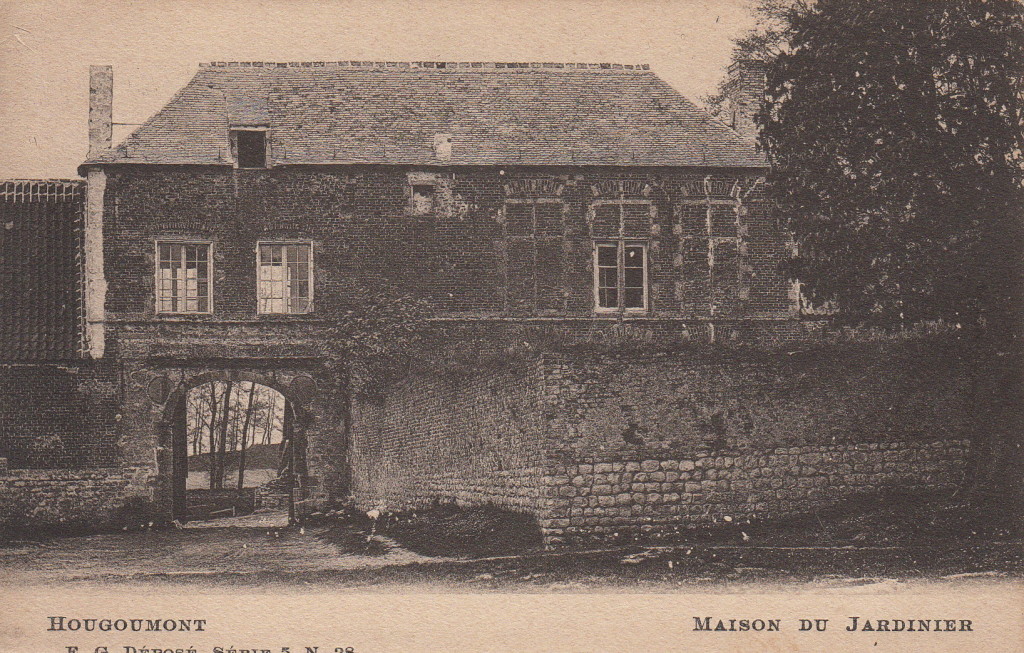 Walking along the South side of the wall, we reach the corner of the formal garden wall. The preparation for the defence of these walls on the night before Waterloo has consumed much ink, and it is intriguing to reflect on the latest thinking that the loopholes were actually prepared by Frenchmen, loyal French royalists, as they prepared to defend Hougoumont against the revolutionaries back in 1794! 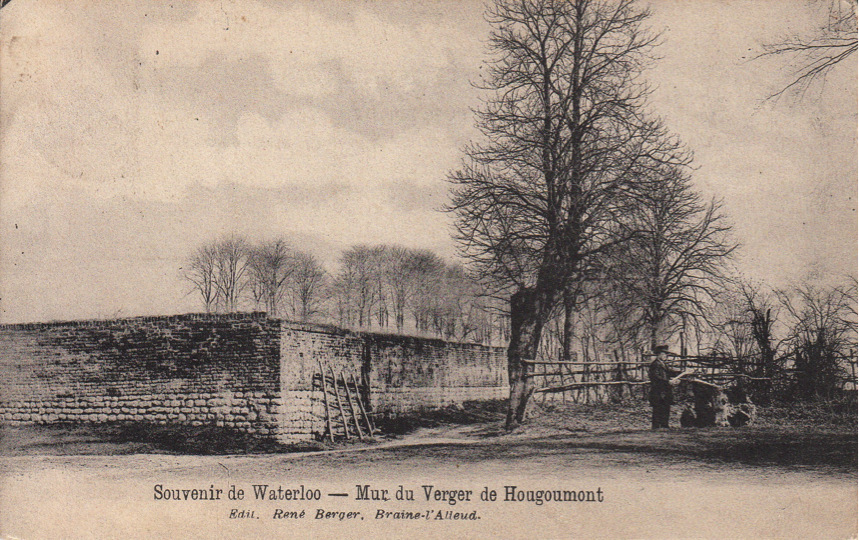 Climbing back in to the formal garden (not encouraged today!) we head back to the courtyard and a very unusual view showing the internal West wall of the complex with low farm buildings that today are simply not there, and from studying many maps from 1816 and 1820 they appear to have been erected long after the battle: 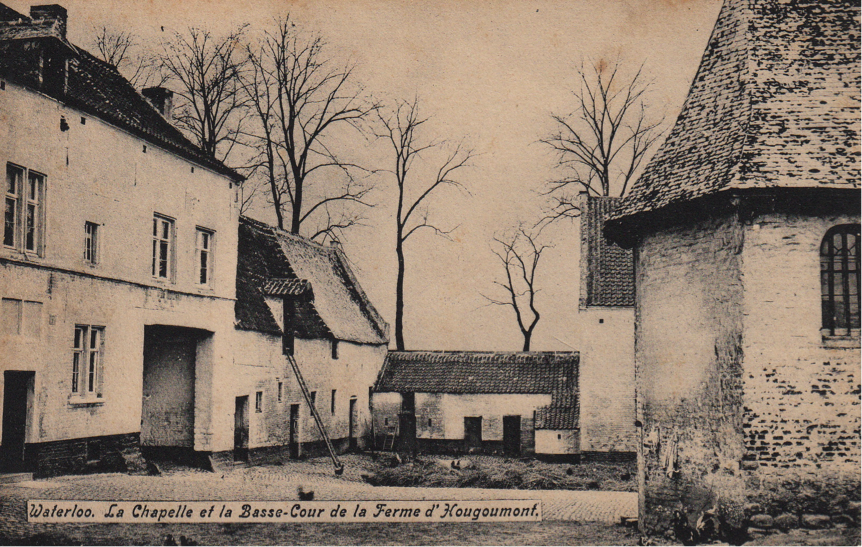 This final evocative image of the crumbling North Gate amply shows the state to which Hougoumont can deteriorate without love and care. It also serves as a reminder that restoration did not just occur for the recent bicentennial, but has been an essential and necessary part of the Hougoumont story ever since the battle: 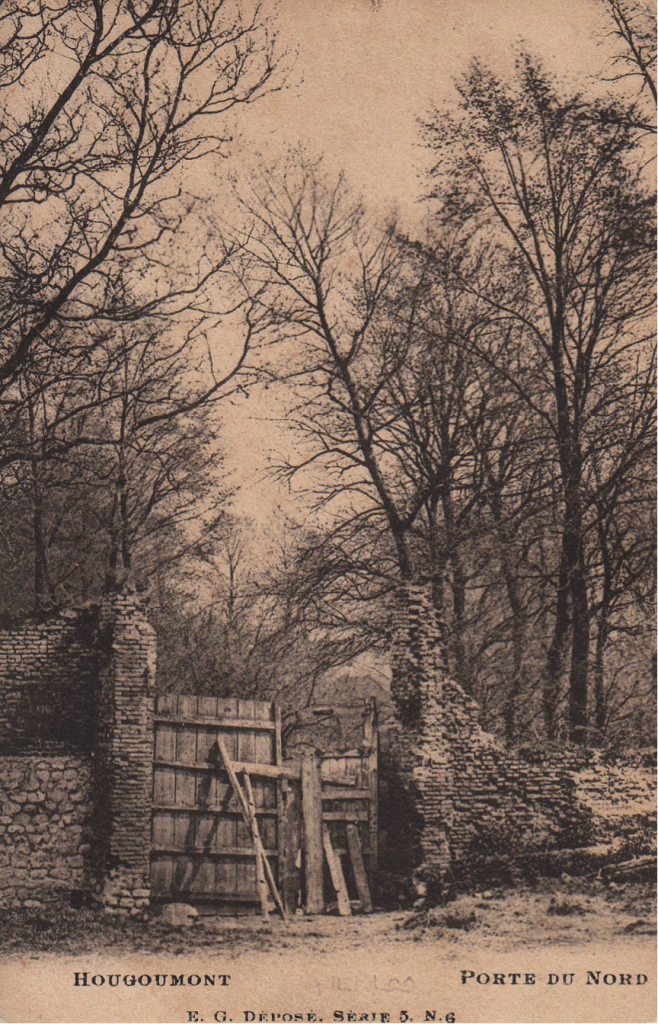 If you can help to date the cards, or have additional information to offer, your contributions and suggestions are most welcome. Please do get in touch with the author at www.GTroopRHA.co.uk. This is the second of a series of articles covering the evolution of different buildings on the battlefield, and if you missed La Belle Alliance in the last journal the full article is on the author’s website. The next article will feature the Lion Mound complex.

The recent output of high-quality analysis on Hougoumont is quite extraordinary. This list is a selection of my favourites, mostly on the web. Finding the time to read them will richly repay those with an enquiring mind: