Mercer’s incredible Journal of the Waterloo Campaign stands the test of time as a wonderful travel guide to much of Belgium. For English eyes of the time, to whom the continent had been closed off through two decades or war, his observation of Brussels’ architecture is peerless.

Who can read his Journal and forget his description of ramparts, markets and parks as “I hurried with eager curiosity from street to street and square to square, catching a slight, and but a slight, glimpse of anything, yet delighted, and devouring all”. His page-long description of the the 1380 Hôtel de Ville is well worth reading to yourself in La Grand Place, along with his comment on the architects of the day “notwithstanding the march of intellect, where is the man who could now sit down and conceive such a structure?”

On a number of visits to Belgium this year I have put his descriptions of landscape, town and City to the test, rarely to find them wanting. So what of the incredible medieval delights of Bruges, nowadays a modern mecca for sightseeing, shopping and chocolate which, to Mercer 200 years ago, was just a short stop-over between Ostend and Ghent en-route to fight Napoleon?

Nowadays a popular base for visitors is the Hotel Navarra in Jakobsstraat, and it is this very building in which Mercer was billeted: 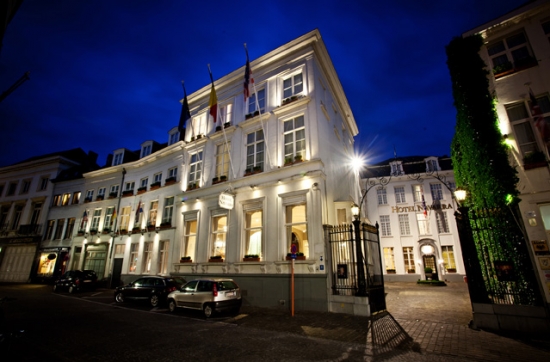 The warmth of welcome today is delightful, and certainly much finer than Mercer’s experience. Having parked guns, horses and men in the cavalry barracks, Mercer and his fellow officers headed for what was then known as the Hôtel de Commerce, their first large hotel, “which had the recommendation of novelty, and everything in it became subject of curiosity. The large dreary hall; the comfortless bar adjoining … the equally comfortless and gloomy saloon behind it … the squalid, dirty appearance of the domestics … all served to chill one on first entering.”  Happily the bar is bright and clean today: 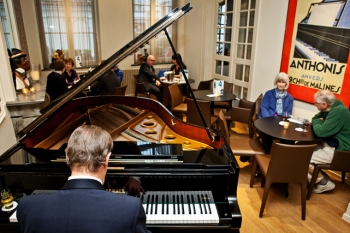 He goes on to describe the sensation of their arrival, followed by orderlies, servants and portmanteaus, which brought every member of staff out to greet them, including the chef, nothwithstanding their filthy cotton jackets and bonnets de nuit, to show them up the staircase and along the bedroom corridors (which are still there!). Mercer found that “the beds (without curtains) were very homely, but quite clean” although “the furniture and utensils of the commonest kind.” Returning downstairs “the place appeared altogether abandoned, and I hastened into the street to lounge away the time until dinner, of which, however, I had my misgivings.” Oh dear.

The building first became a hotel in 1720, its illustrious guest list included the Emperor Josef II of Austria in 1781. Once the area fell under French revolutionary control in 1794 parts of the building were used as a commercial court and tribunal, but the hotel remained. When Mercer stayed the original 17th Century facade was still intact. Internally the staircase had been especially built for a visit by Napoleon in 1802, although he never arrived to see it. One hundred years after Mercer’s stay the hotel was enjoyed by German officers during WW1. 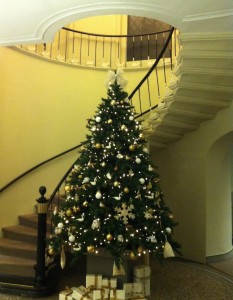 Today’s visitor can very much echo “My ramble led me through the streets of lofty, whimsically constructed houses … gables, with high pointed roofs … chimneys of bizarre and fantastic forms … here and there towers or turrets with high conical roofs … long streets running in wavy lines …” Incredibly he was unimpressed by the Stadhouse, (which he confused with what we now know as Belfort Belfry) with its climb of 366 steps, within its “lofty square tower, surmounted by another … of an octagonal form”: 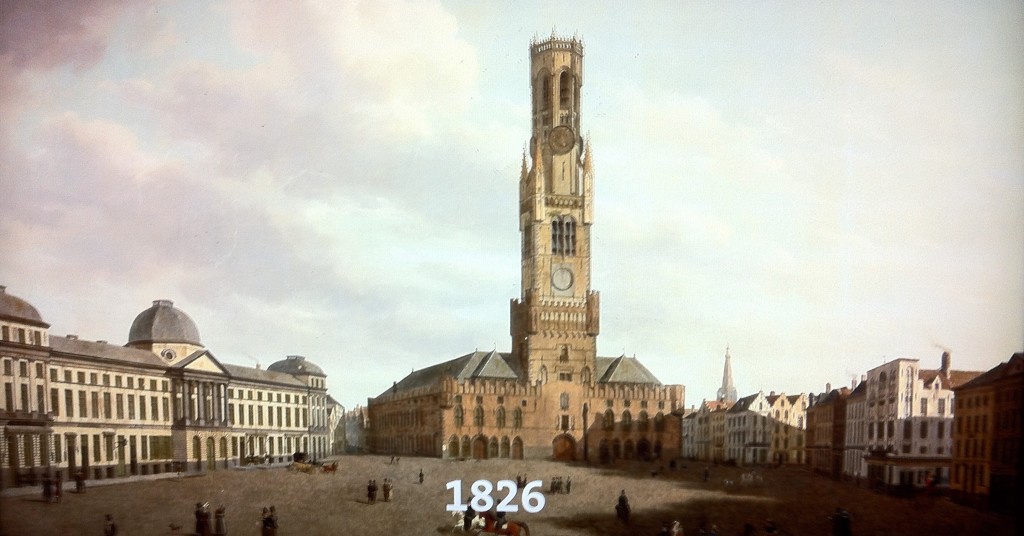 He went on to the Cathedral (now Eglise) Notre-Dame in Mariastraat “… the garish light of broad day exchanged for a mysterious twilight … the busy hum of high market for a solemn silence”, drawn by his love of Gothic structure which he knew well from his native Exeter Cathedral. Reading his description today, where he stood, of the variously earnest or hurried worshippers really brings his writing and the building alive. The pulpit “the most elaborate and ingenious sculpture in wood” is still there, as is “The striking feature in this church are the colossal statues of the Apostles perched upon shelves …” : 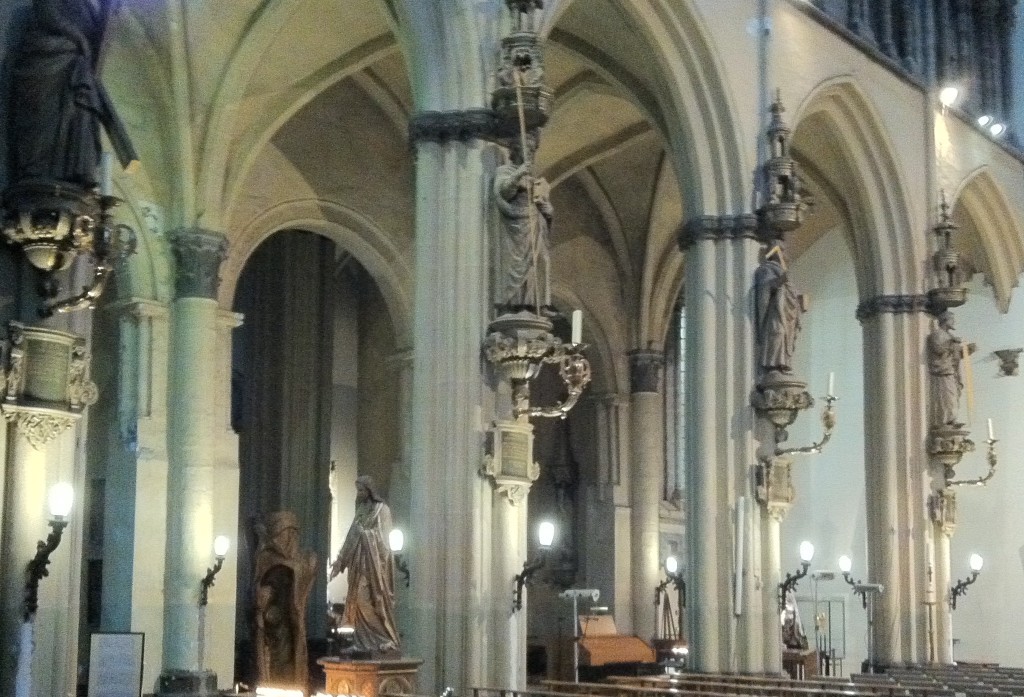 The Church’s landmark spire that Mercer mentions served as a landmark for vessels approaching Ostend, and that some claim could be seen from the Thames (!), is still the world’s second highest brick spire at 122.3 meters (401 feet). Michelangelo’s famous Madonna of Bruges wasn’t there during Mercer’s visit, having been looted by French revolutionaries in 1794, to be returned after the allies seized Paris following Waterloo.

Both this Church of Notre-Dame, and the neighbouring St Saviour’s Cathedral, are undergoing major restoration due to be completed late 2016. I’ve seen the results of a similar restoration in Ninove (another of Mercer’s descriptive church visits) and they are fabulous. Well worth a visit even now.

And after his sightseeing, what became of Mercer’s hotel dinner? … “to my surprise, an excellent dinner awaited me, exceedingly well served, and the attendants (who had made themselves clean) very active and obliging.” Together with “some very old and genuine cognac ... we went to bed in better humour with the Hôtel de Commerce”.

So, in short, when visiting Bruges, Ghent, Ninove or Brussels do carry a copy of Mercer’s Journal with you; read it in the spaces that Mercer described, and you won’t be disappointed.

Now for a more modern selection of personal tourist tips, other than the unmissable cultural sights, how about these: